With the dawn of the sixth age, the god's preachers have become increasingly active, in preparation for their gods return, they have begun to recruit new followers to their cause. But, what will you do? Help them increase their power? Sabotage them in the name of your own god? It's up to you.

SO, this is a simple D&D were you help the gods, or hteir followers, recruit more ofllowers, or you can sabotage the recruiting process.

For sabotaging, you could do some of the following:


I am accepting ideas, anyways, what do you think of this? What could I improve?

Bumping this, can anyone give input, please?

Why can't this be a minigame? I see no reason why not, it could even be PvP to an extent, similar to stealing creation 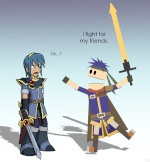 The game fits to me better off as a D&D, something to do casually, and for fun. But if you can explain yourself and give me valid points, I could formulate a better answer to your question. By the way, thanks for the input Handeath, by the way, do you think this is a good concept?

Depending on how you wanted to play this, it could either work as a D&D or a minigame. I should point out that actually minigames are closer to being things you do "casually, and for fun" whereas D&Ds are closer to being an additional item in your schedule to mix up monotonous grinding while still giving XP + nice rewards. The only reason they seem casual is because you have to pay attention and they are fast.

If you want to spin it as a D&D I think it needs a more narrow premise. Perhaps the least used D&D (at least as far as I remember) was the circus, because it simply wasn't cohesive. Successful D&D's have a simple core activity, maybe in a few flavors. For example I think as a D&D this should be restricted almost entirely to training Prayer, where you have to entertain a crowd and compete with an opposing preacher. A crowd of NPC's gather around 2 - 4 podiums in some town/city, you rush there and have to give a rousing speech for the gods.

If its a Minigame then it should be a little plaza near some city, where various gods' worshippers have set up shop. You align yourself with one and then can perform a variety of small tasks to compete with the other gods' teams.

Number of posts : 3550
Age : 26
Location : Within the hallowed halls of the mighty, those known only as nobles.

Isn't there something like this now with aligning yourself a certain representative of a chosen deity for their coming?

But this does look like a fun D&D if it was restricted to prayer xp like Dark Avorian suggested.

Similar topics
» [RELEASE] MyBrute Tournament Title Probabilities
» Does anyone know why the "Pupil" system isnt working
» Version 1.6 update
» Animal ID code not working?
» release dates. how do they work (for the wii)

Page 1 of 1
Permissions in this forum:
You cannot reply to topics in this forum
Who is online?
In total there are 6 users online :: 0 Registered, 0 Hidden and 6 Guests